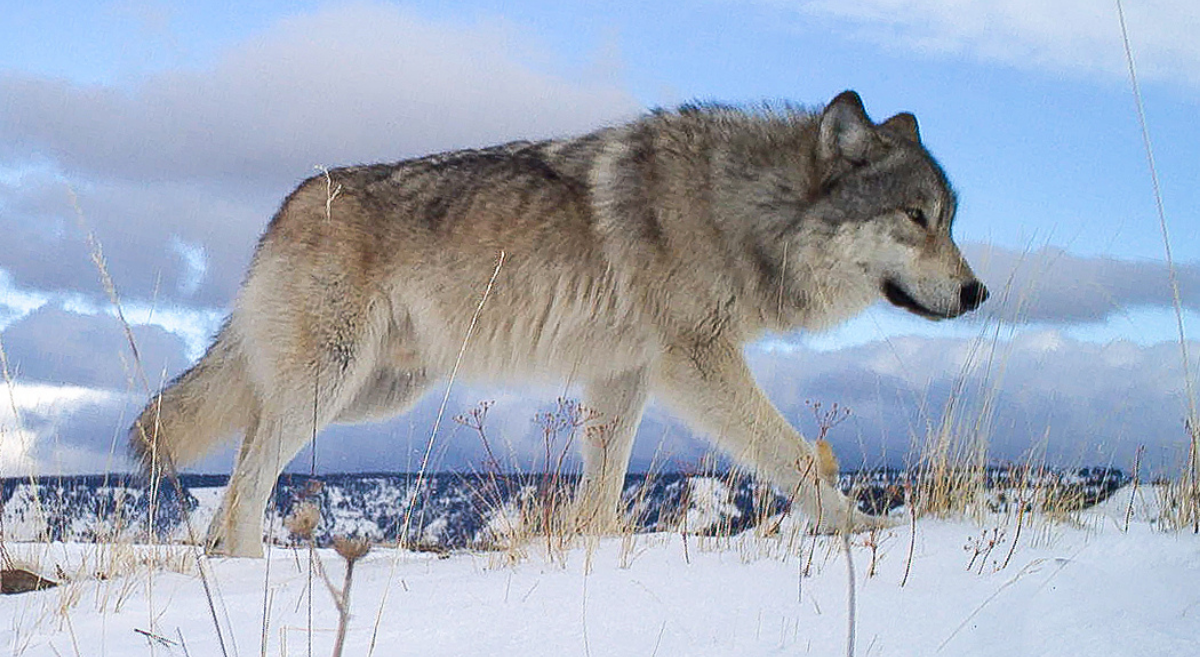 Wildlife conservation groups today announced a $10,000 reward for information leading to an arrest and conviction for the illegal killing of a collared male wolf in Klamath County late last fall.

The illegal killing of wolf OR-103 near Klamath Falls in October 2022 was first publicly reported by the U.S. Fish and Wildlife Service on Dec. 15. The Oregon Wildlife Coalition and conservation partners have a standing reward offer to assist in prosecutions of illegal wolf killings. This $10,000 is in addition to a $5,000 reward offered by the Service, amounting to a combined offer of $15,000.

The federally protected Oregon-born wolf was accidentally captured in the winter of 2021 by a USDA Wildlife Services trap that the agency had set for coyotes in Deschutes County. After being radio-collared and released, OR-103 exhibited a severe paw injury likely caused by the trap. He dispersed to California, where he remained until returning to Oregon last July.

OR-103’s injury greatly hampered his ability to hunt wild prey and he instead preyed on a number of livestock, which are much easier to hunt. Upon returning to Oregon, OR-103 was implicated in more livestock predations over the next few months. In early October, his death was discovered.

“OR-103 didn’t deserve to die like this, and I hope the people who know what happened will do the right thing and come forward,” said Amaroq Weiss, senior wolf advocate at the Center for Biological Diversity. “Vigilante-style killings of wolves are both morally wrong and illegal.”

This new illegal killing marked the fifth known wolf poaching in Oregon in 2022. It followed the gruesome illegal poisoning deaths of multiple wolves in 2021 in the state’s northeast. Eight wolves from four different packs, including all members of the Catherine Pack, were poisoned in neighboring Union County, in incidents between February and July of 2021.

"Oregonians value native wildlife as well as justice and that's why we have such generous rewards for the poaching of wolves and other species," said Danielle Moser, wildlife program manager for Oregon Wild. "We want poachers of all species to be looking over their shoulders and wondering who is going to turn them in."

“Poaching is a serious crime that undermines science-based wildlife management and disrespects people and wildlife alike,” said Bethany Cotton, conservation director for Cascadia Wildlands. “We ask the public to call Oregon’s TIP line with any information they may have to ensure accountability, and we ask both federal and state officials to aggressively investigate and prosecute those responsible.”

Over the past 22 years, at least 34 wolves are known to have been illegally killed in Oregon, and two more were found dead under mysterious circumstances, according to authorities. At least three of these wolves, including OR-103, were found dead in Klamath County and at least one in neighboring Lake County. Arrests and convictions have been made in only three of the 36 deaths.

Oregon wolves have had critical protections removed and then restored in recent years. The Trump administration stripped federal Endangered Species Act protections from gray wolves across most of the country in January 2021, including in western Oregon. In February 2022, a federal court restored those protections.

However, since 2011 wolves in the eastern one-third of Oregon have not had federal protections and have been managed solely by the state. In 2015 the state Fish and Wildlife Commission prematurely stripped wolves of state endangered species act protections.

Scientific research has shown that removing protections for wolves is associated with increased illegal killings of wolves, and that for every illegally slain wolf found, another one to two wolves have been killed that will remain undiscovered.

At last count, Oregon had a minimum of 175 wolves. Following a significant increase in poaching, Oregon’s 2021 wolf count showed the state’s wolf population grew by the lowest percentage (just over 1%) since wolves naturally returned to the state. The 2021 minimum population of 175 wolves increased by just two animals from the 2020 minimum count of 173. The 2022 population count is expected in April.

The Center for Biological Diversity is a national, nonprofit conservation organization with more than 1.7 million members and online activists dedicated to the protection of endangered species and wild places.

Oregon Wild works to protect and restore Oregon’s wildlands, wildlife and waters as an enduring legacy for future generations

Cascadia Wildlands defends and restores Cascadia's wild ecosystems in the forests, in the courts and in the streets.