Redwood burl poaching has long been an issue in the Redwood National Park in California, but now a staff person with the conservation group Oregon Wild has discovered burl poaching in a rare redwood grove in Southwest Oregon near Gold Beach, in the Rogue-Siskiyou National Forest.

“California took action against redwood burl poaching, but now the problem is spreading to Oregon,” observed Steve Pedery, Conservation Director for Oregon Wild. “Vandalizing these rare trees is not only a despicable act, it is a theft of Oregon’s natural heritage.”

Burls are tree growths where the grain has grown in an unusual way. Poachers target both live and dead trees with these growths, and sometimes cut down living redwood trees to access burls from higher up the stem. There is a growing black market for redwood burls, as well as burls from other old-growth trees. Burls are sold for ornamental furniture, veneer and souvenirs. The uncontrolled and illegal harvesting of burls directly threatens individual old-growth redwoods and the surrounding ecosystem.

Oregon’s fragile redwood groves are located in the Southwestern corner of the state, in the Rogue-Siskiyou National Forest. These redwood groves are largely pristine, but they lack Wilderness designation, or other strong legal protections. While poaching within Redwood National Park has generated national outrage, the US Forest Service has not responded as forcefully to illegal cutting on their lands. Conservation groups are alarmed that increased law enforcement on Park Service lands in California may drive the problem north into Oregon.

Oregon Wild is urging the Forest Service to reduce the risk of additional vandalism and poaching of redwood burls by stepping up law enforcement in the area. Abandoned logging roads pose a major problem in the area, as they are used by poachers to access redwood groves. Moreover, abandoned logging roads are often used to conduct other illegal activities, including marijuana grows and illegal dumping of waste.  The simplest solution is to monitor and close the abandoned roads near redwood groves.

“The National Park Service took decisive action to protect their redwoods,” added Pedery. “The Forest Service needs to step up and take action now before redwood burl poaching becomes an epidemic in Oregon.” 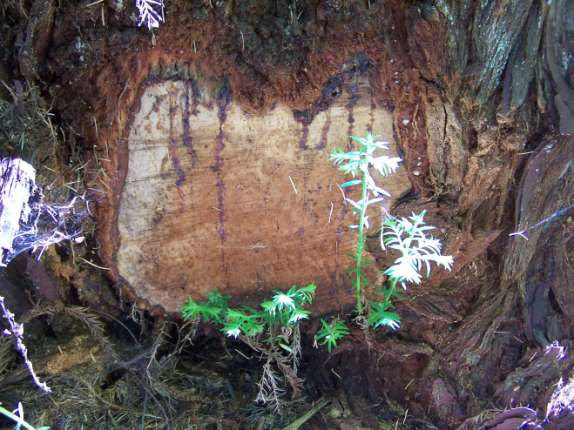