The Malheur National Forest is located in the Blue Mountains of Eastern Oregon. It is named for the Malheur River, whose headwaters are in the southeastern part of the Forest. Malheur is a French word for misfortune ("bad hour"). The fur trapper Peter Ogden named the river in the 1820's when Indians supposedly took a cache of supplies hidden along its banks. 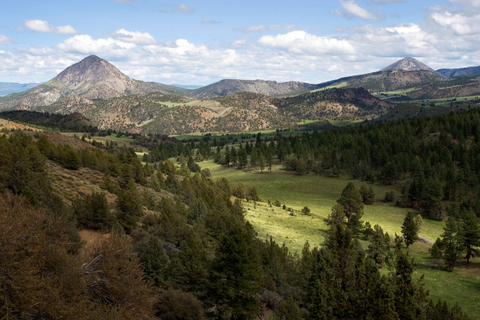 The Forest includes high desert grasslands, sage and juniper, pine, fir and other tree species, as well as the hidden gems of alpine lakes and meadows. The Malheur National Forest contains the largest known organism by area in the world: a giant fungus called Armillaria solidipes that covers 2,200 acres.

There had long been conflicts between sheepherders and cattle ranchers, which had sometimes resulted in gunfights. A new grazing system had to be established to stop over-grazing of the land. Both sides knew that the land was being severely damaged by over-grazing but they had very different opinions as to who was causing the damage. Eventually a grazing permit system was established and is still in use today.

Timber production was a relatively minor part of the Forest until 1930 when a logging railroad was built from the town of Burns into Bear Valley at the heart of the Forest. The construction of this rail network was required by the Forest Service as part of the first large-scale timber sale on the Forest. The Bear Valley Timber Sale, possibly the largest volume of timber ever sold in the continental United States, was sold to the Hines Lumber Company in 1928. Timber harvest from this sale continued until 1968.

Traditionally, the bulk of recreational use has centered on camping, hunting and fishing. The first public campground on the Forest was built before 1916 along one of the Forest's best trout-bearing streams. Today, hiking, horseback riding, camping, cross country skiing, and mountain biking are popular forms of forest recreation.

In 1975 the Strawberry Mountain Wilderness Area was set aside. The size of the Wilderness area was almost doubled in 1984 and an additional Wilderness area, Monument Rock, was also declared.