The Mt. Hood National Forest is 20 miles away from Portland making it Oregon’s largest city’s backyard National Forest. It extends south from the Columbia River Gorge across more than sixty miles of forested mountains, lakes and streams to Olallie Scenic Area, a high lake basin under the slopes of Mt. Jefferson. The Cascade Range Forest Reserve was established in 1893, and divided into several National Forests in 1908, when the northern portion was merged with the Bull Run Watershed and named Oregon National Forest. The name was changed again to Mt. Hood National Forest in 1924. The mountain was named in 1792 by British Lieutenant William Broughton after a famous naval officer Alexander Arthur Hood. Lewis and Clark were the first Americans to document their view of Mt. Hood as they traveled through Oregon.

The Molalas, Kalapuyans, Chinookan Clackamas, Shinookan Wascos, Northern Paiute peoples, and Sahaptin speakers all lived within the area. The Native American tribes were moved to reservation lands but their legacy and influence remains through trails created by their movements across and around the mountain. These trails taught others how to navigate through the forest and would later be used by pioneers, rangers, the recreating public, and automobiles as well.

During the Great Depression the creation of the Civilian Conservation Corps (CCC) and the Works Progress Administration (WPA) helped provide jobs to the locally unemployed while creating buildings and recreation sites within Mount Hood National Forest. Historically, the communities near Mount Hood National Forest have been heavily dependent on the natural resources as well as job opportunities offered by the forest.

There are eight Wilderness areas in the Forest including Badger Creek, Bull of the Woods, Clackamas, Lower White River, Mark O. Hatfield, Mount Hood, Roaring River, and the Salmon–Huckleberry Wilderness. The Mt. Hood Wilderness is the largest and it includes the mountain's peak and upper slopes. While there were new protections for Mt. Hood in 2009 there are still areas that need to be protected and preserved for the future. Oregon Wild has an ongoing campaign to achieve these goals.

The Forest is one of the most-visited in the United States, with over four million people exploring it annually, but less than five percent of the visitors camp in the Forest. The Forest contains 170 developed recreation sites that offer various activities such as fishing, boating, hiking, rafting, horseback riding, skiing, mountain biking, berry-picking, and mushroom collecting. Timberline Lodge was built in 1937 high on Mount Hood for skiers and mountaineers. It is a National Historic Landmark and the ski area itself contains the magic mile chair lift which was the second ever built in the U.S. A portion of the Pacific Crest Trail passes through the National Forest on the flanks of the namesake mountain. Mt Hood is a popular destination for mountain climbers due to its year-round snowfields and glaciers. Mount Hood National Recreation Area was established within Mount Hood National Forest on March 30, 2009. The recreation area comprises three separate non-contiguous units. 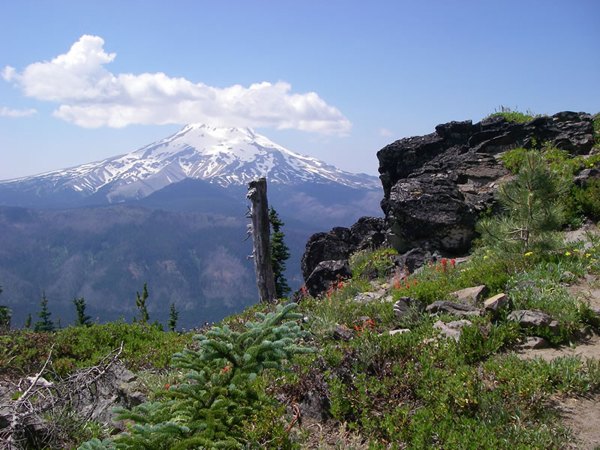