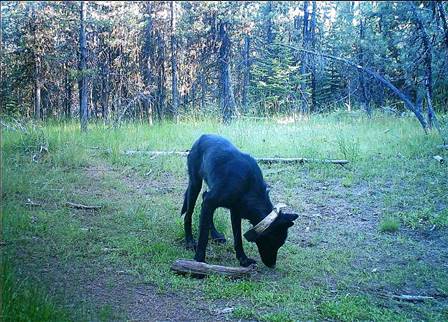 As it has been for most of history, Oregon is once again wolf country. Even so, they and other native hunters are seen by many as novel or – worse – as dangerous forces lurking on the edge of sanitized civilization.

Wolves and cougars and coyotes and bears rarely make headlines on the vast majority of days when they’re simply living their lives. That – coupled with a purposeful campaign of misinformation and fear – is why the word “wolf” is too often synonymous with “conflict”. The real story of wolves is different. That’s why, with the support of Mountain Rose Herbs, we began the Oregon Wild Wolf Rendezvous.

Over the last six years, the trip has been a howling success. It’s been highlighted on everything from Oregon Business Magazine to the state’s most popular outdoor show! We’ve seen tracks and scat. We saw a wolf (?). This year, we heard the howls of the Imnaha Pack!

We’ve met biologists, ranchers, advocates, photographers, business owners, farmers, trackers, and even an elder of the Nez Perce tribe. Our participants have come from as far as Portland, Maine and as near as Portland, Oregon.

Sharing my home in wolf country and connecting with wolf appreciators for 4-days a year has truly become one of the highlights of my year. That’s why it’s always so nice to relive the experience in photos and words. Below are a few recountings of this year’s trip.

Lindsay Raber – the Coordinator of the Pacific Wolf Coalition joined the trip and shared this:

Here I am, weeks after the rendezvous, with recollections and vivid memories that trigger even more vivid images and conversations reminding me of the impact that weekend had on me, both professionally and personally. Everything about the weekend was new, exciting and meaningful…Dense forests, flowing rivers and tall mountains and canyons surrounded the highway as I made my way into Joseph. I felt that unmistakable twinge of homesickness. It felt really good to be back in Oregon. I've really missed it.

…For the next three days of the rendezvous I was reminded of all the reasons I enjoyed living in Oregon, both for the scenery and the people. Each day's excursions and activities offered me the opportunity to learn and see something new and what often follows a new experience, is a renewed sense of curiosity and wonder. With a background in environmental education, this feeling is something I value greatly about experiential learning. There's also something incredibly powerful about learning and exploring outdoors, especially in areas that wolves inhabit once more. Exploring the Zumwalt Prairie, discussing wolf management procedures and processes with ODFW Wolf Coordinator, Russ Morgan and being invited to a rancher's home so he could share his perspective on wolf reintroduction and recovery, debriefs around the campfire - all while being outdoors - are only a few examples of the benefit of changing your physical surroundings every now and then to stimulate your body and mind.

The afternoon we heard wolves howl for us still stands out as highlight of the weekend for me. Even weeks later, I can still hear that sound, just as if I was still sitting silently in the forest, in the company of new friends, staring into the trees and looking off into the hills. In an eerie and goose-bump-raising kind of way, their howl is so distinctive and unmistakable. Could this be a sound we hear on a more regular basis as we hike the trails, fish the rivers, or camp under the stars? To answer this with a 'yes' is perhaps what fills me with the strangest sensations of overwhelming joy and nervousness - joy for the fact that thanks to the efforts of so many, this part of the natural soundscape continues once more, but nervousness that without continued work and progress these sounds may disappear once again.

The afternoon we enjoyed lunch at the Buckhorn Overlook of the Imnaha Canyon also stands out as a highlight of the weekend for me. Growing up in central AZ, I have the fondest of memories from visiting and hiking the Grand Canyon. Each visit was different and every time I gazed into the depths of the canyon, I imagined what life would have been like before planes, trains and automobiles - without development and human impact. The same thought came to me as I sat on the rocky edge of the Buckhorn Overlook, silently gazing into the depths of this canyon. What would it have been like to see wolves and grizzlies roaming the hills and forests? What would it have been like to gather food for the winter and stare into the eyes of a gray wolf as he also searched for food for his young pups? What happens now? Should I sit by and just imagine this landscape as a past reality without the presence of wildlife that once roamed freely? Absolutely not! Sitting there by myself imagining, reflecting and pondering the "What Ifs" reaffirmed for me why we do what we do - why we seek out career paths or life pursuits that focus on a topic we really care about, something that is truly meaningful. For me, the answer is pretty simple: purpose and intention. Being in the company of motivated, passionate, dedicated, compassionate and driven individuals with purpose and intention, inspires me to continue working for an environmental cause - in this case, wolf recovery throughout the Pacific West.

Here's to continued rendezvous, in all capacities, to raise awareness and build more outreach efforts…The more conversations we share, the louder our voices become and soon our words become actions. I want to hear wolves howl and watch their packs thrive.

With gratitude to the entire Oregon Wild staff, volunteers and supporters, this is the kind of gathering that I strongly recommend continue for years to come.

This was one of the coolest trips I’ve ever done in my life!  Oregon Wild’s promotional material said that they would give us various perspectives on the wolves that are now residing in eastern Oregon, and wow! did they deliver what they promised.

We tracked wolves in one of the most beautiful and varied landscapes in all of Oregon - we learned about wolf behavior, what they eat (what they don’t), where they have recently been seen, where they tend to live, how they travel (often very long distances!).  Some of the local trackers showed us fresh prints (and scat), and we learned how to distinguish those from those of coyotes.  We even got to hear adult wolves, and some wolf pups howling not very far from us.

In addition we talked with a state wolf biologist - he taught us about the collaring program, how wolves travel and how far, and how, when there is a kill of local cattle, a determination is made about whether or not it was a death from wolf, coyote, cougar, or other causes.

We were invited to a third generation rancher’s home where, from his front porch, he would occasionally see a wolf.  He gave us a glimpse into a ranchers’ life - the time and money and effort put into each head of cattle. I got a sense the nights he might be tending a sick animal - and the threat he feels to his lifestyle and livelihood with wolves nearby.

And then, in our “spare time,” we took a trip onto a plateau overlooking Hells Canyon, and got a mini-course on the complex geology of the Snake River gorge, the Wallowa Mountains, the volcanic activity, glacial activity, and historic movement of land masses - all of which created the stunning beauty of northeastern Oregon.

As a conservationist, I learned that it is easy for me to be idealistic from my living room in Portland, and to want to save all the natural world.  And I truly have an incredible respect for that world, and an abiding interest and fascination with animal behavior, but on this trip I also gained a broader view of some of inherent dilemmas and complexities where the human world and natural world intersect.

I came back from this trip so excited about what I experienced and what I learned that I haven’t stopped talking about it for three weeks!  And I now have some friends who are already asking when the next one will happen (next summer!).

I am considering going again - it was that cool!!!

(and if you haven’t pitched a tent in many years - don’t worry - I hadn’t either and I did just fine!)

My sincere thanks to the Oregon Wild crew who put this program together.  It was stunning!!!

Howls in the wilderness aside, wildlife don’t often get a voice in the decisions that affect them. That is, unless those of us who value them speak up. And those voices are so much more powerful when they are – as Ruth & Lindsay point out – informed by experience. It’s easy for anti-wolfers to hate the abstract “liberal elite” and call them out-of touch. It’s easy to paint every rancher as a blood-thirsty gun-toting redneck. But that doesn’t help very much.

Those of us who speak for wildlife are outnumbered in places like Washington DC and Salem. We are outspent and outshouted. We have a lot on our side – like facts and mainstream values. However constantly fighting for wildlife and against old prejudice and misinformation can be tiring. It’s easy to become desensitized.

But even for grizzled old veterans of the “wolf wars”, experiences like the Rendezvous are profound. For me, getting fresh perspectives, reading reflections like these, and seeing the faces of people as they experience the howl of a wolf or even an old paw print in the dust helps me reconnect to the passion that drives me through my day-to-day.

These trips are made possible by Mountain Rose Herbs. With their generosity, and that of Oregon Wild supporters from across the country, like the wolves themselves, the trips have expanded to the wildlands of Crater Lake. Whether or not you choose to write a poem, I hope you’ll join us there – or next year in Wallowa County!