Where wolf? There. Wolf? 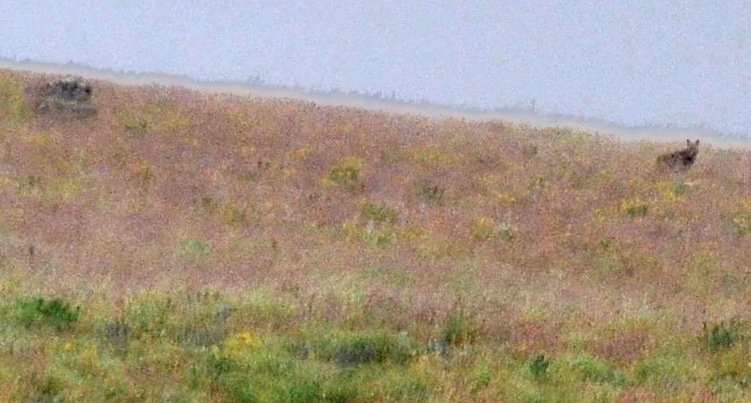 We live in an age where the answer to any question is no further away than the widget in your pocket. We’re bombarded by websites, articles, and videos promising to show us “the most amazing thing you’ve ever seen”…and they often deliver.

In such a world, I’ve become fond of saying “it’s nice that there’s a little mystery left in the world.”

Earlier this summer during the Oregon Wild Wolf Rendezvous, that conviction was put to the test.

We always remind participants that Oregon’s wolf population remains small and elusive. Though credible wolf sightings are becoming more frequent and widespread, it’s still rare indeed to see a wild Oregon wolf. We usually find signs of wolf in the form of tracks and scat. And while we’ve seen elk, deer, coyotes, and birds of all manner, what we hadn’t seen going in to year 5 was a wolf.

And so it was before the third day of our trip that we met with local naturalist – and possible soothsayer - Ralph Anderson. As we prepared to embark on an exploration of the Zumwalt prairie, he said that with the overcast and cool weather, it would be a great day to see elk…and even a wolf in pursuit

Below is the story as I shared it to several wolf experts around the country, and their responses. Take a look at the picture and the story. What do you think? Did Ralph predict the future? Did we see a wolf? Was it a coyote? Or is this one of those last bits of mystery I’ve been trying to embrace?

Based on my experience (if there's any uncertainty, it's a coyote) I thought it was a coyote. I was joined in my opinion by a dogsledder who has seen her share of both wolves and coyotes and got the best look at it. However the bulk of the group felt it was a wolf. That included an experienced local naturalist and a member with a great deal of experience with wolves.

I've attached the best photo (the photo above) we have and it's making me question my assessment (and my recently discovered confidence in making such calls). 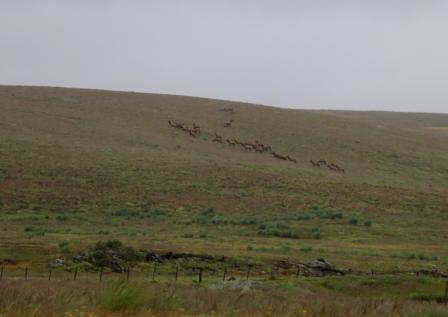 On Saturday late morning (cold, overcast, and rainy) just North of XXX we saw a herd of elk followed by several deer run over a hill and across the road with a degree of purpose. They were bunched and heads were held high. Later we spotted a canid pooping behind them. It became very aware of our presence and generally moved in the direction of the elk before we lost track of it. Our groups were of mixed opinions on its size, gait, and purpose. The tail was held down and quite brushy. The animal was dark, but it was also wet.

When we passed the area again a few hours later we saw two coyotes nearby. One seemed significantly smaller than this animal. A few distant photos provided mixed feelings, but the attached photo is giving me pause. The ears appear pretty round and the face is pretty blocky. However it goes against my gut feeling...whatever that is worth.

Any thoughts? Wolf? Wishful thinking? Impossible to know from this photo?

THE EXPERTS WEIGH IN:

A wildlife manager with knowledge of Oregon’s packs:

Kind of pixellated, so it’s hard to tell for sure for me, but first impression is that it’s pretty wolfy.  Most of the million coyote photos (in any condition) sent to me where the animal is looking toward I first notice the pointed nose.  This doesn’t have it, but I can’t tell if that’s because the pixels are “rounding off”.  It does also appear to be a dark animal, though that too is hard because many of the photos colors appear to be lumped together?

So…maybe wolf to me, but I won’t bet a nickel on it.  It is in an area where the Imnaha wolves use, though not too much this time of year.

How’s that for a way of saying I don’t know?

The Executive Director of a wolf education center:

The critter appears to have "heavy" features contrary to calling it a coyote…the animal size and coloration would make me lean toward a wolf-like canid. It also tends to resemble a German shepherd in all honesty with the large ears and heavy muzzle.

IF the animal was "pooping" I would suggest picking up the scat for a DNA sample.

A local resident familiar with wolves in the area:

A Yellowstone wolf watcher working on coyote research on the East Coast:

Tough one but with that blocky head and body I really feel it is probably a wolf. I used a magnifying glass and the coyotes out west are so much smaller. If that photo was taken in the East I might say coyote, or what is referred to as a "coywolf". I am sticking with wolf…Wish that photo was a bit clearer. Man, how exciting to have possibly, let me say in my opinion probably, spotted a wolf in the wild.

A naturalist and wildlife watching guide in Yellowstone:

The ears are pretty big relative to the rest of the head, fairly certain it is a coyote.

The initial reaction by participants:

Whatever it was, I can say with certainty that the fifth annual Wolf Rendezvous was a tremendous success! You can read more about the 2014 trip here or see photos here. I hope you’ll join us for the sixth in 2015. This year’s trip filled in just 26 hours, so be sure to sign up to be among the first in line for next year!

Without that DNA analysis or a better photo, I’m hoping to go back and measure that rock someday for a size comparison. However in the absence of that, I may just have to live up to my latest favorite saying and embrace a little mystery.

In the meantime, it is worth reflecting that for most of the last century, Oregonians who wanted to see a wild wolf would have had to travel to places like Yellowstone or the Boundary Waters. If you saw a dog-like animal on the prairie or in the forest, there wasn’t much mystery. Now you better hustle with those binoculars. In parts of the state, it could very well be a wolf.

With just a couple dozen known wolves in the state, such sightings remain precious and rare. However the chance to see a wolf, hear a howl, or walk in the tracks of a wolf is something worth passing on to future generations.  Thanks to the protections of the Endangered Species Act and conservation-minded citizens, we’ve got a second chance. Let’s get it right this time.

Note - no Rendezvous recap would be complete without thanking Mountain Rose Herbs for making the trip possible through their generosity!