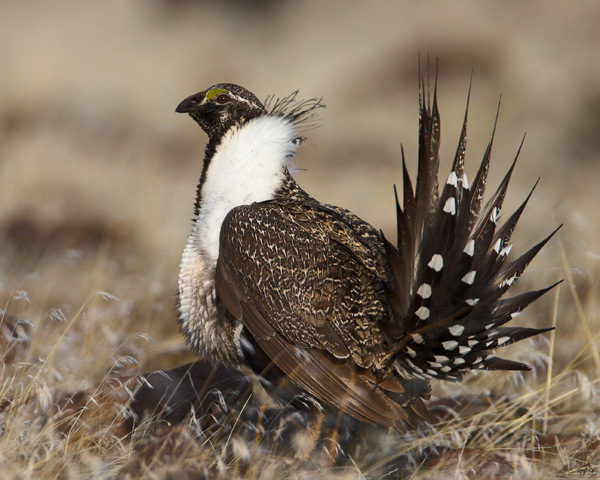 Sagebrush meadows in eastern Oregon provide the sage grouse with its year-round home and food source. These chicken-like birds are brownish-gray with white flecks and black bellies and tails. The sage grouse has a very distinct mating ritual—the males gather in groups called “leks” and put on a display for their female audience that includes strutting around while spreading their tail and wing feathers and inflating the air sacs on their chests to let off a loud popping noise. Females choose a male from the lek and after mating with him, find a suitable place under a sage bush to make their nest. Cover under sage bushes also provides sage grouse with protection from predators, as they can’t fly far enough to evade predation.

Sage grouse rely on very specific habitat conditions to maintain healthy populations. Since sagebrush makes up more than 90% of their diet, large expanses of the meadows where this plant grows are important to protect. Unfortunately, sagebrush is not a very resilient plant, and can take decades to fully recover from large fires or improper range management. Exploitation of this habitat for agriculture or fossil fuels is also problematic. The fragility of sagebrush ecosystems gives the destruction of sage grouse habitat a particularly intense effect on the population size of the birds.

In 2002, a petition was filed to list the species under the Endangered Species Act but in 2015 the petition was rejected by US Fish and Wildlife, stating that the primary threats to the species had been lessened by conservation efforts put in place by federal, state, and private landowners. However, in a massive, sweeping report published in 2020, the US Geological Survey stated that the number of sage grouse has plummeted 80% since 1965, with half of the decline happening since 2002.

Thankfully, private efforts from conservation groups like the Sage Grouse Initiative have partnered with over 1,800 ranchers to conserve more than 7 million acres across 11 states, but with no legal footing to stand on, groups like these are forced to rely on the good intentions of individual people.

The USGS report has shown that the “status quo” isn’t working and is sure to bolster the argument for listing of this charismatic and iconic bird species.