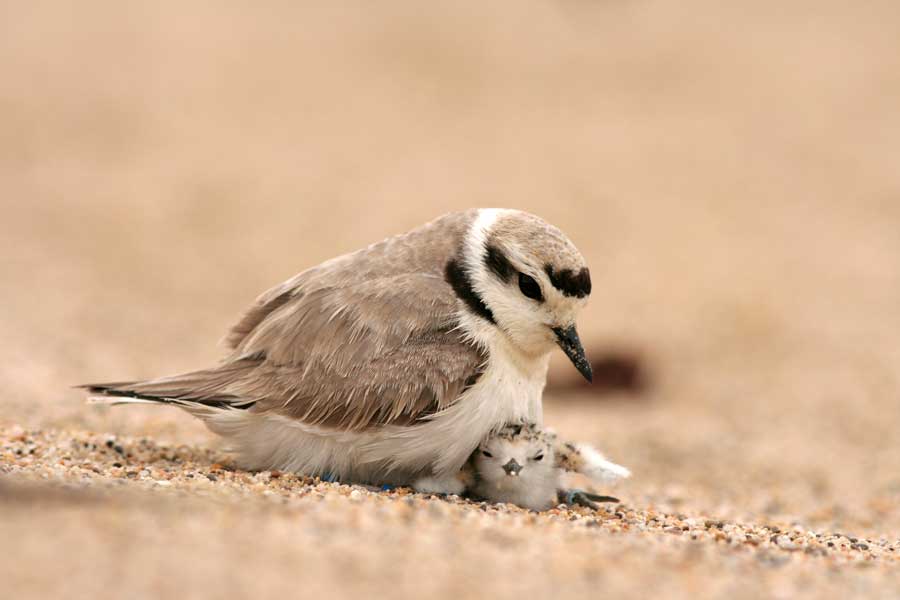 The western snowy plover, a subspecies of the widely distributed snowy plover, is a small shore bird that winters and breeds along the pacific coast of the United States. It can be distinguished from other plovers by its small size, pale brown on top, and white underside. These plovers blend in well with their sandy habitat, and have dark black patches on their head and sides during the breeding season. To attract a mate, males dig a shallow nest in the sand and bow to the female they are trying to impress. Snowy plover pairs typically raise 3 young per nest, and within a week of hatching the female finds a new mate, leaving the male to care for the young hatchlings, though females will usually help the male with the last brood of the season. Almost as soon as they hatch, they are foraging on their own for small beach invertebrates such as sand fleas. Western snowy plovers hunt by sight, running along the beach and stopping to peck around in the wet sand or tide-cast kelp.

In recent years, much of the beach habitat that is so important for nesting western snowy plovers has been degraded, resulting in a decline in numbers. These birds require bare beaches with unstable sand and pebble substrate to build their nests on, but the introduction of non-native European beach grass to many western beaches has significantly changed the habitat for the worse. In addition to reduced nesting habitat, increased flow of human visitors to beaches can result in smashed or abandoned nests. Future threats include the projected rising of sea levels due to global warming, which will further reduce plover nesting habitat. In order to preserve these vulnerable birds, it’s vital that humans try to lessen their impact on sensitive beach habitats, and that we protect the untouched habitat that is left. Oregon Fish and Wildlife lists several things the public can do to increase the chance of plover survival and breeding: