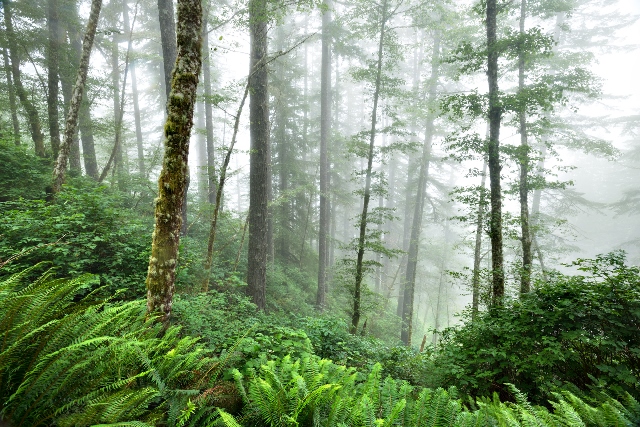 Background
The Elliott State Forest is 82,000-acres of publicly owned forest in Oregon’s Coast Range just north of Coos Bay that has historically been logged to provide funding for Oregon’s Common School Fund. Tying logging revenue to school funding was envisioned at a time when old-growth forest and wildlife seemed limitless, but after a century of unsustainable logging practices this program is increasingly in conflict with Oregon’s modern conservation values. Today only 41,000 acres of the Elliott’s old-growth forest remains, making the public forest one of the largest uncut areas left in the Oregon Coast Range.

View a map of the Elliott's mature and old-growth forests

The Elliott is an ecological treasure and it belongs to all Oregonians. Surrounded on three sides by industrially managed tree plantations and clearcuts, the Elliott provides an island of critical habitat for numerous imperiled species such as the marbled murrelet, northern spotted owl, elk, and several kinds of salmon. In fact, 22% of all wild Oregon Coast Coho salmon originate in the Elliott’s rivers and streams! The old-growth trees within the State Forest also help mitigate climate change by capturing and storing vast amounts of carbon, and they also improve water quality by absorbing, storing, filtering, and gradually releasing clean water into forest streams.

Public Forest for Sale
​In​ February​ 2017​, two of the three members of ​Oregon's​ State Land Board voted to sell the​ ​Elliott State Forest to a private timber company ​to be clearcut. ​In the weeks following the privatization vote, ​Oregon Wild and coalition partners helped mobilize a powerful grassroots response to Democrat Tobias Read's decision to sell the forest. The people’s response was tremendous and after receiving thousands upon thousands of emails, calls, and postcards, Tobias Read reversed his position and expressed support for keeping the forest public. In May of 2017 the State Land Board voted ​unanimously to halt the sale ​and keep the Elliott public​​​.

Elliott State Research Forest?
In late 2018, the State Land Board directed the Department of State Lands and Oregon State University to explore the creation of a publicly owned state research forest. Over two years, advisory committees and government officials worked to develop a proposal for OSU management. The plan is nearly complete (in late 2020) and includes some significant conservation gains, as well as tradeoffs that leave some clearcutting and logging of older forests on the table. Though the current comment period has expired, you can still read about some of the details here. In December of 2020, the Land Board voted to continue developing this plan but final pieces to the plan, its governance, and a federally-sanctioned Habitat Conservation Plan must still be worked out in the coming year.