Waldo Lake - Gem of the Cascades

Surrounded on three sides by the 39,000-acre Waldo Lake Wilderness, Waldo Lake is one of the purest lakes in the world, and a true gem of the Cascades.

One of the largest natural lakes in Oregon, and the second deepest after Crater Lake, Waldo Lake is also the source of the nationally-designated Wild and Scenic North Fork of the Middle Fork Willamette River. Managed by the Willamette and Deschutes national forests, the surrounding wilderness was designated by Congress in 1984 to protect the area's outstanding forests, scenic mountains, and backcountry recreation values.

Many visitors value Waldo Lake for the area's outstanding recreational opportunities, solitude, and scenic beauty, and a recent decision by the Forest Service, while not without controversy, will ensure the continued purity of the lake's waters, and the backcountry experience sought after by so many. 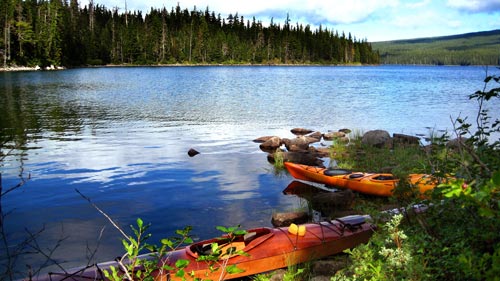 Located near the crest of the Cascades, Waldo Lake was difficult to access until the 1970s, when a paved road and several campgrounds were added to the area. Increased local population and recreation use – including fishing, camping, motor boating, and snowmobile use – has led to a decline in water quality, though the lake's water remains amazingly pure.

To address negative impacts of increased use, the Waldo Lake Basin Plan Committee (representing 12 different recreation user groups and organizations) studied the area for two years. In 2000, the group recommended several changes in management on and around Waldo Lake including: changing the lake's recreation status from "roaded natural" to "semi-primitive, non-motorized;" limiting and containing impacts of dispersed camping around the lake; placing limits on outfitter/guide permits in the area; phasing out internal combustion engines (including banning float planes) on the lake; and limiting snowmobile use to existing roadways.

In December 2001, the Willamette National Forest took an important step towards maintaining Waldo Lake's pristine qualities when it proposed to implement a phase-out of motors on and around the lake, with additional recreation recommendations.

Motorized-use proponents appealed the 2001 decision and the agency backed out. A new Environmental Assessment was begun in 2004 and a repeat of the 2001 agency decision was announced in April 2007 after overwhelming support for a gas motor ban.

This new 2007 rule would have eliminated gas motors (but not electric) on the lake, banned generators and motors in the semi-primitive areas outside the campgrounds around the lake, banned float planes from the lake, and provided for emergency motor use.

Due to go into effect in the summer of 2009, a legal challenge brought by motor advocates postponed implementation. The court then tasked the Forest Service and the Oregon State Marine Board with agreeing on a new rule, and in January 2010 the Marine Board adopted an entirely new motor ban on Waldo Lake.

Another lawsuit from pro-motor interests threatened the rule, and the Marine Board decided to reconsider its 2010 motor ban rule in early 2012, when it at last banned motorized boat use on the lake, but curiously did not put any restrictions on the use of float planes.

Oregon Wild supports the prohibition of internal combustion motors on the lake, as well as motorized equipment within the semi-primitive non-motorized area surrounding much of the lake. The ban on motors benefits lake users, water quality, and the wilderness-quality of the Waldo Lake area.