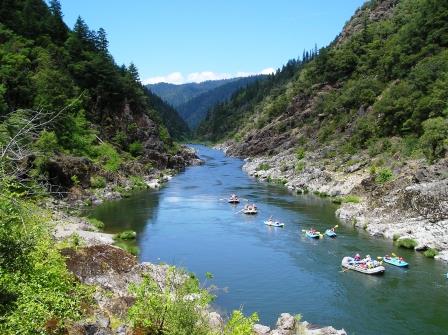 Located on the Medford District of the Bureau of Land Management (BLM), the Zane Grey roadless area is about 25 miles northwest of Grants Pass.

This pristine area lies on the edge of the designated Wild and Scenic Rogue River for approximately 26 miles and is adjacent to the Wild Rogue Wilderness Area to the northwest. The Zane Grey roadless area received its name from the famous adventure author who kept a cabin in the heart of the area.

The Zane Grey roadless area is the largest BLM roadless area in southern Oregon and northern California. It is important from the standpoint of wildlife migration. Because many species are known to use river corridors as travel routes, the Zane Grey acts as a link from inland habitat to coastal habitat.

Steep, precipitous canyons with elevations ranging from 400-3800 feet fold and meander through the area. As a result, dozens of waterfalls cascade down the steep canyon walls in the spring. There are many stunning places of beauty here. Mossy green plunge-pools and fern walls near creeks with rocky, talus slopes between waterways are common encounters when walking in this area. One rare plant species of stonecrop, a flower that grows right out of rock on dryer sites, is known to occur in the Zane Grey roadless area. Northern spotted owl, northern bald eagle, osprey, cougar, bear and Roosevelt elk are all known to inhabit these lands. The Zane Grey roadless area is also known to be an important area for anadromous fish.

The Zane Grey roadless area is a heavily visited and prized recreational area, and the Rogue River is actually managed to reduce and control the amount of rafters and people camping along the banks.

Photo by KS Wild.
View All