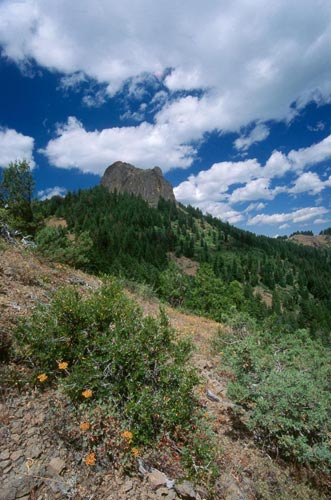 The Soda Mountain area in southwestern Oregon is an ecological mosaic where the state's eastern desert meets towering fir forests.

Biodiversity
The biodiversity of its fir forests, sunlit oak groves,  meadows filled with wildflowers, and steep canyons is unmatched in the Cascade Range. The area is home to a spectacular variety of rare species of plants and animals whose survival in this region depends upon its continued ecological integrity. Roosevelt elk, cougars, black bears, golden and bald eagles, goshawks and falcons roam its lands and skies.

National Monument
In June 2000, the Clinton administration designated 53,000 acres of federal land in the area as the Cascade-Siskiyou National Monument to protect this extraordinary biological reserve. That designation prevents mineral exploitation and most logging. However, livestock grazing and off-road vehicles still threaten the area.

The Cascade-Siskiyou National Monument was a step forward in protecting the Soda Mountain area – how big a step remains to be seen. When a final management plan for the monument area is completed, wilderness advocates fear the Bush Administration will drive log trucks--and more--through loopholes with no regard for Soda Mountain's wild backcountry areas.

Need for Wilderness
That's why local citizens and scientists have been pushing for designation of the Soda Mountain Wilderness for approximately 23,000 acres of the monument backcountry.  Wilderness designation is needed as soon as possible to guarantee full protection for this ecologically outstanding area.

Photo by Elizabeth Feryl. Map by Erik Fernandez.
View All