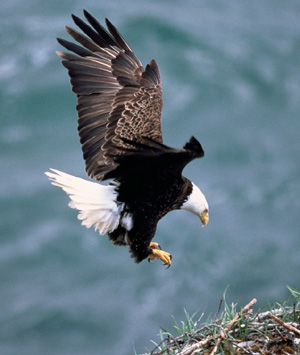 The bald eagle, our national bird, is a common sight near lakes, rivers and coastal areas in almost all of the continental states, as well as in Canada and Mexico. These birds of prey make their stick nests high in stands of mature conifers or hardwoods near the large bodies of water where they do the majority of their hunting. Fish like salmon are these raptors’ prey of choice, but they will also eat small birds and mammals, as well as carrion. Sometimes they’ll even steal a catch from another bird of prey. Bald eagles are large birds, and the females are significantly larger than males. Male and female bald eagles mate for life, only finding a new mate if theirs dies, and lay from one to three eggs a year. Juvenile bald eagles are dark brown with white mottling, and don’t develop their iconic white head and tail until they are four to five years old.

Once numbering in the hundreds of thousands, bald eagles numbers have been steadily declining since the early 1700s. Their population reached an all time low in the 1950s, due to the now banned chemical DDT. In recent years, this species has experienced an amazing recovery, and in June of 2007 they were removed from the endangered species list. This inspires great hope in wildlife advocates. However, the bald eagle is not completely out of harm’s way. Threats to these birds include destruction of nesting habitat due to old-growth logging in many parts of the country, and pollution of natural waterways. Eagles and other birds of prey are particularly sensitive to foreign chemicals; these substances build up in the birds’ systems in extremely high concentrations because of the large numbers of fish they catch out of polluted waters. Clean rivers and watersheds are extremely important for the health of bald eagle populations, as is the protection of their old-growth habitat. Oregon Wild’s campaigns concerning these issues helped contribute to the ongoing recovery of the bald eagle, and will continue to do so in the future.