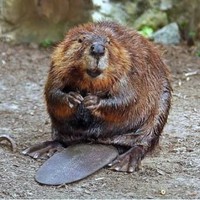 We need your help to restore beavers! Sign our petition.

In addition to being the largest North American rodent, the beaver is Oregon’s state animal. The beaver has always been an important part of Oregon. While Oregon was being settled the fur trade was a staple to the economy, earning Oregon the nickname “the Beaver state.” While beavers are no longer economically important, beavers create important habitats for fish and other wildlife.

Beavers are common throughout Oregon’s waterways and riparian areas. They continue to grow throughout their lives and can reach 65 pounds and up to four feet in length. They range in color from reddish brown to almost black. Aside from their easily recognizable homes, beavers themselves are one of the most iconic members of the rodent family with their webbed hind feet and broad, flat, scaly tail. While they have poor eyesight, beavers have a keen sense of smell and use it to detect predators, find food and recognize family members. Contrary to popular belief, beavers do not eat fish, they are herbivores eating a variety of aquatic plants and the soft inner bark of trees.

It has been said that next to humans, beavers do more to shape their environment than any other animal. Beavers build dams across waterways creating ponds behind them and then build their lodges in the center of the pond. The lodges have an underwater entrance, keeping the beavers safe from predators.

Beaver ponds create important habitat for many other species, including juvenile Coho salmon. Some migratory birds also prefer landing on beaver ponds instead of more open bodies of water. Streams and rivers throughout the country where beaver dams are present have higher clarity levels and lower pollution levels. This is believed to be a result of the beaver dams slowing water and allowing these things to settle to the bottom.

While Oregon’s beaver population is generally healthy, habitat loss due to development is a real threat in some areas. Beavers also have many other positive effects on riparian systems that would suffer if their numbers declined significantly. It is believed that the beaver population in North America before European settlement was between 100 and 200 million. Due to heavy trapping they were nearly extirpated from North American. Thanks to protection efforts the beaver population has grown to an estimated 15 million animals.

Popular belief says that thriving beaver populations would destroy vegetation and forests along their ponds. Long term studies however have shown that the opposite is true. The U.S. Forest Service is even working to reestablish healthy beaver populations because of their positive impacts as a keystone species. Their dams help to stabilize water levels, especially in dry months. Beavers are often criticized for chewing down trees and causing damage. However studies have been shown that not only do these trees grow back, but the beaver cuts create room for a diversity of plant life that creates habitat for other animals.