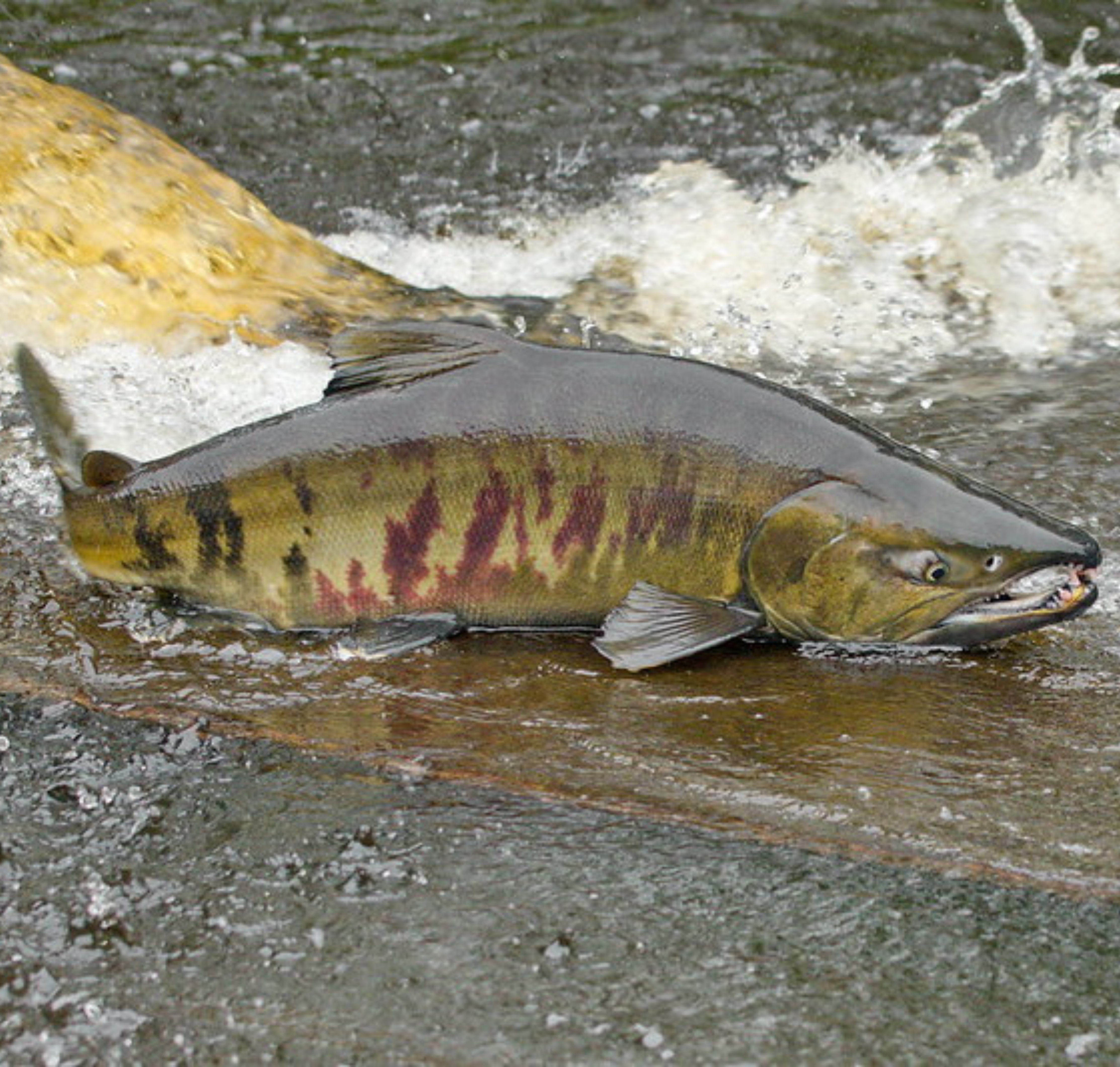 Chum salmon are anadromous fish of the salmon family and are one of the largest species of Pacific salmon. They are metallic green/blue along the back with silvery sides and black speckles while in the ocean. However, when matured chum salmon enter their spawning phase and return to freshwater, they're appearance changes drastically. Both males and females develop a deep black and red tiger stripe pattern. Males develop very large, canine-like fangs, which may explain the nickname “dog salmon”. Males also develop dark olive/brown coloration and a hooked upper jaw. Females may develop a dark horizontal bar running along the lateral line. Chum salmon spend their adult lives in the ocean and migrate back to freshwater streams (usually where they were born) in order to reproduce. Their offspring inhabit the freshwater during a short juvenile stage after hatching before heading out to the open ocean. Chum salmon typically mature and spawn between the ages of three and six and are capable of laying 2000 to 5000 eggs. All chum salmon die shortly after spawning.

Chum salmon distribution in the North Pacific includes Korea, Japan, Okhotsk and the Bering Sea, Arctic Alaska, and south to San Diego, California. They're also found in Iran. They can be found in nearly every small Washington coastal stream. However, they’re less abundant in Oregon, inhabiting just the lower Columbia River and a few coastal streams. Chum typically spawn in rivers and tributaries closer to the ocean than other salmon species and small runs are still holding on in a few small to medium sized rivers along the northern coast of Oregon, like the Trask and the Kilchis. The Columbia River and its tributaries once sustained runs of 500,000 to 1,000,000 chum salmon each year, where they primarily spawned in tributaries below Celilo Falls. Now, it is believed that 14 of the 16 historical populations of chum salmon in the Columbia River are extinct.

Chum salmon populations are affected by climatic conditions, habitat loss from dam construction and urban development, and poor water quality from agricultural runoff and logging practices. Chum salmon are also harvested for food. They're utilized for caviar, and mostly marketed as canned food, but also fresh, dried/salted, smoked, and frozen.

In recent years there have been many viral videos of salmon swimming across roads during floods and extremely high tide events on the coast and along Puget Sound, the Skokomish River, in particular.  Chum are very powerful swimmers, having adapted to cross shallow mudflats and sand bars, and when they encounter a road culvert or a dike that blocks them from heading upstream that will swim up and over it.