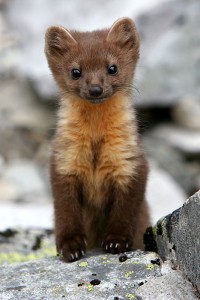 The Humbolt marten is one of 14 recognized subspecies of the American Marten (Martes americana). Martens are a small carnivore in the Mustelidae family that resemble fishers (Pekania pennanti) but are smaller and generally lighter in color. The Humbolt martens live in only three areas in the Pacific Northwest: one population in Northern California, and two remote populations in Oregon, including the Oregon Dunes National Recreation Area. They are voracious, opportunistic eaters and will prey on anything from deer mice and voles to larger prey like rabbits and birds. They may also eat berries and other foods if prey animals are not readily available. These marten tend to be solitary creatures and defend their territory when threatened by others. They prefer forests with multiple canopy layers, but have been known to inhabit shore pine with dense shrub cover, like in the coastal dunes.

Historically occurring throughout coastal forests in Northwestern California and Oregon, the Humbolt marten was thought to be extinct until it was rediscovered in 1997. These martens have been wiped out from 95% of their historic range, and fewer than 500 are thought to currently survive. Decades of unregulated fur trapping followed by habitat loss and fragmentation from unregulated timber harvesting are likely the two most important factors that caused declines in the distribution and abundance of Humboldt martens. Continued logging of old growth forests, predation, and human-caused mortality from vehicle collisions and trapping, continue to threaten the small population of martens. Current research shows that just 2 or 3 human caused deaths could wipe out the Oregon central coast population. If threats like these are left unaddressed, these cute but fierce carnivores could become extinct in the next 30 years. California has already taken the necessary steps to protect the rare marten by unanimously granting the species state Endangered Species Act protections. Oregon Wildlife Commissioners, on the other hand, denied conservation groups’ petition to list the species as ‘endangered’ under the state ESA. Ten years after the initial petition, in September 2020, the U.S. Fish and Wildlife Service announced that the Humboldt marten will receive federal protection as a threatened species under the Endangered Species Act.