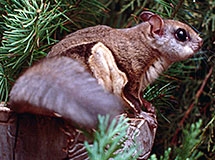 The Northern flying squirrel is of the Sciuridae family and is the smallest arboreal (tree-living) squirrel in Oregon. They have gray-brown fur with gray-beige bellies, big black eyes, and pink feet. These flying squirrels aren’t actually capable of powered flight like a bird or a bat. Instead, they have a membrane that extends from the wrist of the foreleg to the ankles of the hindleg, allowing them to glide from tree to tree without touching the ground. Slight movements of the legs allow them to steer and that puffy tail acts as a brake. They take shelter in tree cavities, leaf nests, underground burrows, and abandoned nests of birds and other squirrels. Northern Flying Squirrels are nocturnal, but may occasionally be spotted during daylight hours. Optimal conditions appear to be cool, moist, mature forest with abundant standing and down snags. Their activity continues, even at low temperatures and in snow. According to the Oregon Department of Fish and Wildlife, the statewide presence of these squirrels includes “forested areas west of the Cascade Range and eastward to near Lakeview, Lake County, Paulina Lake, and Deschutes County. The species also occurs in the Blue, Ochoco, and Wallowa mountains”.

The Northern flying squirrel can be found in Alaska, Michigan, California, West Virginia, Wyoming, Oregon, North Carolina, North Dakota, Utah, South Dakota, Vermont, Nevada, Idaho, New Jersey, New York, Montana, Wisconsin, Virginia, Pennsylvania, Ohio, New Hampshire, Minnesota, Maine, Washington, Massachusetts, and many regions of Canada. As with many species who rely on forested ecosystems, Northern flying squirrels face the threat of invasive species, wildfires, climate change, and habitat loss due to land use practices, such as deforestation. Subspecies fuscus and coloratus of the Appalachian Mountains are both currently in a fragile state. According to the U.S. Fish and Wildlife Service, the Carolina Northern Flying Squirrel (fuscus) is endangered and the Virginia Northern Flying Squirrel (coloratus) is in recovery. Declines in the southern Appalachians may be linked to Strongyloides Robustus, an intestinal parasite of southern flying squirrels. The southern flying squirrel appears to be unimpaired by the parasite, however, because there’s a small overlap in the habitat of the northern and southern flying squirrels, the northern flying squirrel has been infected and this infection appears to be lethal. Another concern for the northern flying squirrel is the balsam woolly adelgid, a relatively harmless parasite of firs in Europe, which was unintentionally introduced to North America in the 1900s. The invasive species is extremely harmful to its new environment. Both the Balsam Fir and the Fraser Fir are the host species of this parasite, however, Fraser Firs are much more susceptible to the damage caused by it and, if current trends continue, the adelgid could eliminate all mature Fraser Firs in the next few decades. This poses a challenge for the northern flying squirrel because they rely so heavily on large, mature firs with naturally occurring cavities.