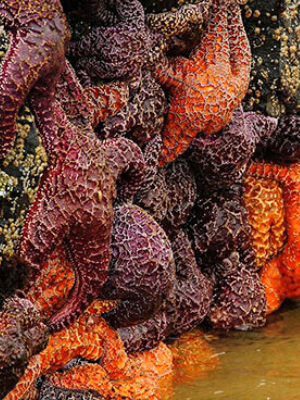 Ochre sea stars were once an abundant part of Oregon’s rocky intertidal zone. Their bright orange, red, and purple bodies are still a favorite sight for tide pool visitors, but their numbers have been greatly reduced by sea star wasting syndrome. The plague of sea star wasting syndrome that started in 2013 has been deemed the largest observed die-off of marine animals in recorded history.

Research is currently underway to better understand the causes of sea star wasting syndrome. It is believed that rising water temperatures may play a role. Continued research and monitoring is important for the conservation of ochre sea stars.