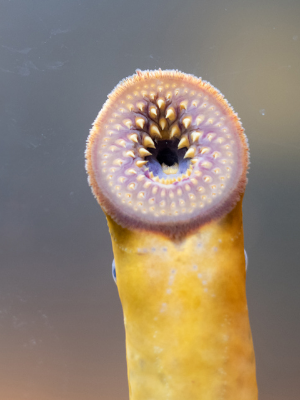 Oregon’s rivers, streams, and coastal waters used to be home to many more Pacific lampreys. Sadly, their distribution is now reduced across the state and throughout much of the west coast. Much of this species’ decline is due to the introduction of dams and other impassable barriers.

Much like salmon, Pacific lampreys begin life in gravel-bottomed streams. They spend the next 3 to 7 years floating downstream and acting as filter feeders, cleaning up the mud and sand as they go. Once the lampreys enter the ocean, they mature into adults. As adults, lamprey function as parasites feeding on fish and marine mammals. They spend their adult lives in the ocean before returning to freshwater streams to spawn.

Pacific lamprey may not be the most colorful fish in the sea, but they are valued members of aquatic ecosystems. They are indicators of a healthy stream ecosystem and are an important first food for Indigenous people in the Pacific Northwest.

Pacific lampreys continue to struggle with habitat access due to lack of passage caused by obstructions like dams, culverts, and tide gates. Changes in water quality and altered flow caused by practices such as dredging and channelization are also issues for this species.

The Nez Perce are leading efforts to protect and restore lamprey in Oregon. There are multiple dams that prevent lamprey from accessing river habitat along the lower Snake River and Columbia River. Removing these dams would provide lamprey with means of passage and greatly aid in the restoration of Pacific lamprey populations. This is part of a growing movement toward dam removal across the western United States. On Washington’s Olympic Peninsula, two dams were removed from the Elwha River between 2011 and 2014. This was the biggest dam removal project in history. This project took decades of work by the Lower Elwha Klallam Tribe and others to complete and marks a historic move forward in river ecosystem restoration. In places where dams can’t be removed, there are specially designed “lamprey ladders” that can be installed to help lamprey navigate waterways more easily.