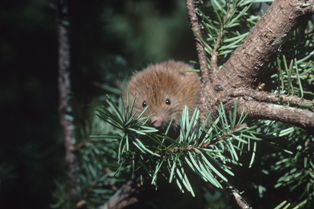 The red tree vole is a mysterious rodent that lives in nests at the top of old-growth Douglas-fir trees. Their geographic range is restricted to mature conifer forests in the western Cascade and coastal regions of Oregon. Reddish-brown in color, red tree voles are similar in size to a common mouse, with their tails making up half their body length. Red tree voles are highly specialized rodents, as they only live in tall, old-growth Douglas-firs, and the trees’ needles are their only source of food. The moist conditions of their habitat make for a reliable water source for the voles in the form of dew on the needles. Although they are seemingly elusive and they continue to evade observation by humans, the spotted owl has made a living off of preying primarily on this enigmatic arboreal rodent.

In October 2011, the North Oregon Coast Distinct Population Segment became a candidate for federal listing, but the USFS deemed it “not warranted” in December 2019. A high level of specialization like that of the red tree vole leaves a species especially susceptible to endangerment. The presence of specializers makes for a very diverse ecosystem, but only as long as the ecosystem meets the unique needs of those species. Red tree voles not only rely on specific conditions and habitat, but their dispersal ability, or ability to colonize new areas, is very limited. Logging of old-growth forests in Oregon destroys important nesting territory, and fragments Oregon’s once expansive wilderness. The young trees that grow in the clear-cut areas are unsuitable as red tree vole habitat, and as a result the rodents will not inhabit these areas, leading to very small patches of forest with nesting colonies. To protect red tree voles, and in turn the species that rely on them for food such as the spotted owl, it is essential to protect their old-growth habitat. Oregon Wild’s Wilderness and Roadless campaigns are at the forefront of the effort to protect Oregon’s old-growth forests and the species that rely on them.