Forests and Watersheds up for Protections in Salem

If you read our alerts and blogs you are well aware of the attack that the Trump administration has launched against important environmental rules and laws recently, and you know that Oregon Wild is fighting back to defend the wild places you care about. In the face of these unprecedented attacks, we are continuing our 40 year history of working to implement and defend rules that protect vast wild landscapes and endangered species, and keep public land in public hands, and that work is as important as ever. But many of Oregon’s forests and watersheds aren’t managed by the federal government, and Oregon Wild knows that we must have strong state laws, rules and policies that defend Oregon’s Forests and Watersheds from destruction no matter who owns them.

Today, I want to tell you about some of the work we are doing on that front, because it has never been more clear that Oregon must do more to protect clean water and healthy forests with strong state laws, and today, those laws do not exist.

We have gotten started on a very busy 2017 in Salem, with Oregon Wild and our conservation partners working to reform Oregon’s ‘weakest in the West’ logging laws, and I want to fill you in on what’s going on in the 2017 legislature with our backyard forests and streams!

Now, let’s dig into some legislation!

To start, in the State Senate, we are very excited to announce that Senator Dembrow has introduced a bill in the Senate Committee on Environment and Natural Resources that would protect Oregonian’s drinking water from the dangerous practice of aerial spraying clearcuts, an important step in reforming Oregon’s out of date logging laws. SB954, which is modeled on Oregon Wild’s 2016 ballot initiative, would help ensure that the herbicides logging companies spray out of helicopters never get anywhere near our water. This bill is simple, it says if the watershed has a drinking water source, you can’t buzz around in a helicopter spraying herbicides. It seems like common sense to most folks, nearly 70% of Oregonians polled favor an outright ban on the practice, but we expect stiff resistance and big spending from the logging and chemical industries to stop us.

I am also excited to say Oregon Wild is supporting 3 Senate bills from our partners at Beyond Toxics to; protect the native pollinators forests and farms depend on, warn nearby landowners of toxic sprays before they happen, and help farmers and landowners recover damages if aerial spray still manages to drift on to their property. Please click the blue text to support Beyond Toxics bills! 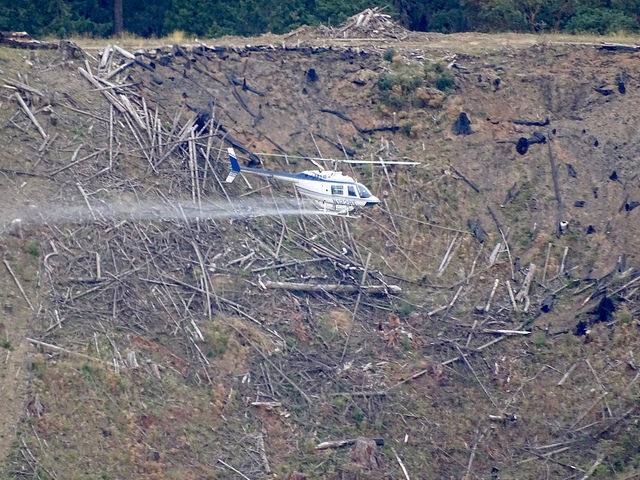 On the House side, we are supporting several bills that takes steps to reign in Oregon’s out of control corporate clear-cutters and herbicide sprayers.

The biggest logging reform bill in play this year, introduced by Representative Holvey, with support from a number of conservation groups, is HB3226, and implements comprehensive reform of the Oregon Forest Practices Act. This bill, which we urge you to support by clicking here, would ensure streams are protected from clearcutting, protect people and streams from clearcut induced landslides, restrict aerials spraying, and much more.

Representative Holvey has also introduced two separate bills to reform logging taxes in Oregon, requiring clear cutting companies to pay their fair share for the damage they do. One of those bills, HB2467, is based on an Oregon Wild concept calling to stop using logging taxes to fund logging propaganda from the Oregon Forest Resources Institute. Holvey’s second timber-tax bill would raise taxes on clearcuts and  provide incentives to companies who provide more jobs to local mills instead of exporting our forests,  go out of their way to protect water, and other best practices!

On a County level - If you missed it, make sure to check out our blog endorsing community efforts in Lane and Lincoln Counties, where concerned citizens are done waiting for environmental leadership in Salem, and are working to protect themselves from dangerous aerial spray. If you're in Lane County, Sign Here to get this measure on the ballot, and HERE  if you can volunteer to help, Lincoln County residents Click Here.

Reading about all of this, you may be under the impression that Oregon Wild spends a lot of time in Salem wandering the halls of the Capitol Building, but to tell you the truth, that is such a small part of how a bill becomes a law. Without the support of Oregonians like you, these ideas never become laws. I spend my time in the field, in small coastal towns, hearing your concerns, helping you reach lawmakers and educate your communities every day.

These bills are possible because Oregonians in towns like Rockaway Beach, Garibaldi, Gold Beach, and elsewhere have refused to back down for years. You demanded change, and we’ve got your backs! More than ever before, elected officials in Oregon are hearing rural Oregon’s demand for fair treatment, clean water, and truly sustainable economies. Thank you for all your hard work.


I’ll see you out there!