Oregon has a proud history of environmental leadership – from establishing public beaches to protecting farmland from urban sprawl. Yet our state’s logging laws – known as the Oregon Forest Practices Act (OFPA) – haven’t lived up to this reputation.

In fact, Oregon’s logging laws are widely considered to be the weakest in the region. Our current rules allow timber corporations to clearcut vast areas, logging right across steep mountain slopes and year-round headwater streams. Neighboring states like Washington and California have developed far stronger logging laws to safeguard water supplies, protect fish and wildlife, and reduce the risks of landslides. Oregon has a lot of catching up to do.

The OFPA is important because it sets the standards for all logging, replanting, road building, and chemical spraying on private and state-owned forests, where the vast majority of Oregon’s harvested timber comes from. The OFPA’s weak forestry standards apply to 12 million acres of forestland in Oregon, which contributes to wide-spread degradation across the landscape.

Current logging practices are degrading watersheds, contributing to climate change, and driving salmon and other wildlife to the brink of extinction. Below are the most significant impacts that industrial logging has on our environment: 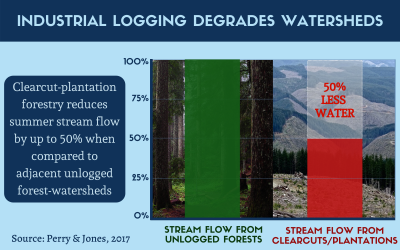 3. Over the last half century, industrial forestry has driven a steady decline in Oregon’s salmon and steelhead populations. Aggressive logging practices increase sediment levels and temperatures in our rivers and streams – which will only get worse as climate change warms waterways and increases erosion.

5. Short-rotation forestry has transferred massive amounts of forest-carbon into the atmosphere, creating a “carbon debt” that we can only repay through climate-smart forest practices. OSU researchers have found that clearcutting less and letting trees grow longer before logging can significantly increase the carbon drawdown potential of our forests and help Oregon meet its carbon reduction goals (Law et al. 2018); however, the timber industry remains vehemently opposed to climate action (ever heard of “Timber Unity”?). Read Oregon Wild’s Forest-Climate Report to learn more.

Want to join an activist community working to modernize these logging rules, or just learn more? Become a Friend of Oregon's Forests.

In addition to these impacts to water, wildlife, and the climate, the current rules under the OFPA are also failing our communities on many fronts. Perhaps most importantly, the industrial model of forestry relies heavily on the extensive use of chemical spraying, which endangers the health of rural communities throughout western Oregon.

Following a clearcut, timber corporations spray large areas with toxic chemicals (primarily herbicides) to kill native plants that would otherwise compete with tree seedlings. Each year, helicopters spray these weed killers on hundreds of square miles of Oregon timberland, sometimes drifting far from their intended target. In recent years, many rural Oregonians have reported that chemical “drift” has sickened them and their animals, or adversely impacted their farms, gardens, and water supplies. The chemicals commonly applied by helicopter include several known carcinogens that are banned in countries around the world due to their proven health risks.

What’s worse, these days timber corporations are paying less taxes than they used to. According to an investigation by the Oregonian and OPB, timber corporations pay less than 1% of the severance taxes that they used to pay in the 1990s. This has left a huge hole in county budgets and resulted in failing water infrastructure, unrepaired roads, low funding for schools, and inadequate health care.

Industrial logging also undermines other industries that are central to Oregon’s economy, such as tourism and outdoor recreation. In fact, these industries sustain three times as many jobs as our state’s wood products industry. By modernizing our laws, we can recover our commercial fisheries and strengthen our outdoor economy, which will help safeguard sustainable jobs for decades to come.

What We’re Up Against 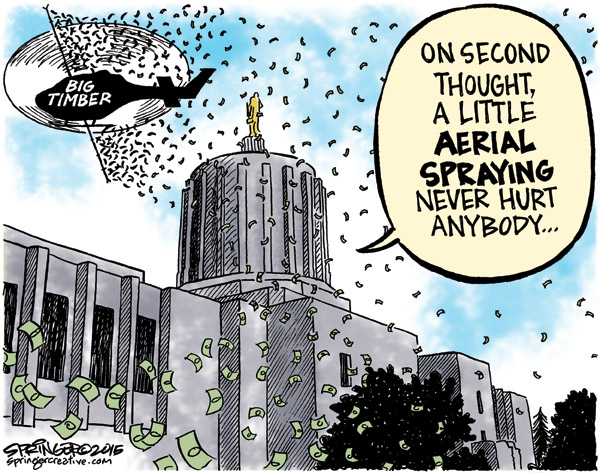 So, why are Oregon’s logging laws decades behind neighboring states? Ever since its inception, the State of Oregon has been dominated by powerful timber interests that have maintained weak standards to benefit their bottom lines.

Today, lawmakers in Oregon’s State Legislature receive more corporate donations from the timber industry than any other state in the country (in sheer dollars and per capita). In fact, since the campaign donation limits were abolished in the 1970's, Oregon legislators have received record amounts of cash from all sorts of corporate interests, which has contributed to the outsized influence of corporations on public policy and regulation.

Watch this short video from the Oregonian to learn more.

Campaign donations aren’t the only way timber corporations have maintained weak logging regulations. Since the early nineties, the timber industry has conducted a campaign to sway public opinion through a quasi-governmental agency called the Oregon Forest Resources Institute (OFRI). Even though it’s funded by public tax dollars, OFRI has primarily served as a  propaganda machine for the timber industry, peddling a rosy narrative through a multi-million dollar ad campaign that Oregon’s current forest practices sufficiently protect clean water, wildlife habitat, and public health.

In addition to spreading misinformation about Oregon’s logging laws, OFRI has also engaged in questionable lobbying activities over the years. The Portland-based firm was recently exposed by Oregon’s largest media outlets for having attempted to suppress scientific research at OSU that highlighted the climate consequences of industrial logging. The investigation also found that OFRI has coordinated with timber lobbyists to influence legislators and even helped develop dark money political advertisements, an egregious violation of ethics.

These revelations about ORFI have spurred public outrage that may lead to these tax dollars being re-allocated to more appropriate purposes – such as helping Oregon’s Department of Forestry better enforce the laws on the books.

As Oregon’s population grows and the planet warms, we will increasingly depend on responsible forest stewardship to safeguard clean water, recreational opportunities, and protect wildlife habitat. By bringing our logging laws into the 21st century, Oregon can revitalize rural economies while simultaneously enhancing the many benefits that our forests provide.

That’s why a coalition of community and conservation groups from around the state has formed to modernize our logging laws. The Forest Waters Coalition advocates for improved logging practices on Oregon’s private and state-owned forestlands for the benefit of watersheds, fish, wildlife, and frontline communities. Public health experts, forestry scientists, and federal regulators have all recognized the need for improved forestry rules, and robust public polling shows that the general public supports stronger laws protecting our forested watersheds. Demand for change has never been higher.

Oregon Wild has been playing a key role in leading this campaign for years, and we’re already seeing encouraging results. In June 2020, the Oregon Legislature passed needed reforms to our state’s aerial chemical spraying rules – increasing no-spray buffers around streams, schools, and water intakes, and requiring advance notice to nearby residents before spray occurs.

The 2020 legislation also kickstarted a process to limit steep slope logging, increase forest buffers around streams, and other measures to restore rivers and streams for salmon and steelhead. This process – known as a Habitat Conservation Plan (HCP) – could bring Oregon’s logging laws in closer alignment with states like Washington, and California. In fact, it was an HCP agreement that saw Washington’s logging rules vault ahead of Oregon’s 20 years ago, resulting in major gains for fish and water quality.

In the next few years, advocates for Oregon’s forest waters will need to continue speaking up in favor of our forests, watersheds, and wildlife during public comment opportunities. The work is just beginning!