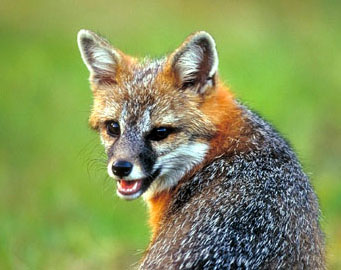 This shy nocturnal fox is widespread across most of the United States except the northern plains and Rockies. It tends to stay in forested areas where it feeds primarily on mammals the size of rabbits or smaller. However - an opportunist omnivore - the gray fox will eat almost anything else it can find. Gray foxes can - and do - eat large amounts of fruit, nuts, grains, grasshoppers, crickets, beetles, moths, butterflies, carrion, and small amounts of herbage. When foraging, their range may extend across 5km or just over 3 miles.

As implied by its common name, the gray fox has gray fur with black tips on its back and tail. It tends to have red fur on its sides and the sides of its neck. While related to the introduced European Red Fox, the Gray Fox has a comparatively smaller white bib under the throat. It also avoids human contact and tends to stay away from urban areas, unlike the Red Fox, which is much more common in urban areas.

These small members of the dog family build their dens in dense clumps of brush, abandoned buildings, rock outcroppings, hollow logs, or burrows. They are crepuscular meaning they are most active at dawn and dusk. Consequently they are rarely seen in daylight.

Gray foxes depend on both older forests and thicker young forests for their habitat. Both forest types can be threatened by current logging practices. The threat of habitat loss is only increased with urbanization and other expanding development. Vital grasslands habitat is also at risk by some modern agribusiness practices.

Habitat fragmentation, and degradation, may be particularly problematic in regions where human numbers are increasing rapidly and important habitat is converted for agricultural, industrial, and urban uses.

Because of its relatively lower fur quality compared with other species, commercial use of the Gray Fox is somewhat limited. However, 90,604 skins were taken in the United States during the 1991 and 1992 season (Linscombe 1994). Poaching, hunting, trapping, and poisoning - including by government agencies - may also be of concern for the Gray Fox population. The stable population and relatively low economic value have caused little research to be conducted on Gray Foxes so some gaps in our knowledge remain.

See the Gray Fox in action!