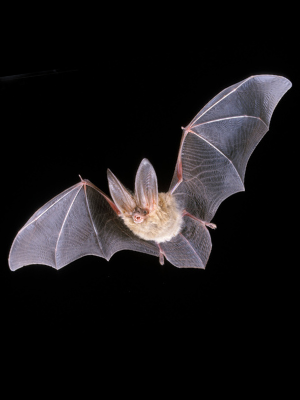 Townsend’s big-eared bats are medium-sized bats with pale gray or brown fur and buff colored undersides. As the name indicates, these bats have very large ears reaching up to 38 mm in length. When laid back, these long ears extend to the middle of the bat’s body!

Unlike many bats that tuck themselves into cracks and crevices, Townsend’s big-eared bats prefer open roosting areas. They use caves, mines, insulated buildings, and occasionally, hollow trees. Because of their specific roost requirements and high sensitivity to disturbance, these bats are somewhat rare. They are sensitive to light and movement, and may sometimes react to disturbance by abandoning their roosts. You should never disturb this bat if you encounter it.

White-nose Syndrome is a fungal disease that has killed millions of bats across North America in the last two decades. The fungus that causes this disease has been detected in Townsend’s big-eared bat populations, but luckily no signs of the disease have been detected at this time.

Townsend’s big-eared bats are insectivorous, feeding primarily on moths. Insect-eating bats are the primary predators of night-flying insects and act as very effective pest-control! It has been estimated that insectivorous bats provide more than $3.7 billion worth of pest control each year in the U.S!

Although Townsend’s big-eared bat can be found throughout the state of Oregon, its numbers are declining in part because it is very vulnerable to human disturbance. Some conservation actions that can be taken include employing gates and season closures during sensitive times, maintaining buildings that are used as roosts, and retaining and creating large-diameter hollow trees.